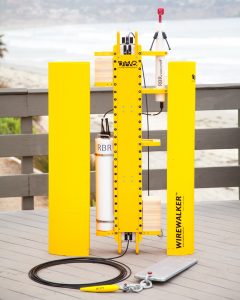 Del Mar Oceanographic’s Wirewalker TM profiling system uses ocean wave energy to drive an instrument platform (often referred to as the Wirewalker vehicle, or simply “the Wirewalker”) vertically through the water column. A single suite of  user-selected sensors can repeatedly sample over a range of depths, rather than produce time series at a single location. The Wirewalker is purely mechanical, with batteries required only to power sensors and communications. It profiles  continuously, with wave energy driving the buoyant profiler downward. On reaching the deepest user specified sampling depth, it free-ascends along its suspension cable (aka profiling wire), nearly completely decoupled from mooring motion. This provides an ideal opportunity for precise ocean measurement. The Wirewalker profiling vehicle is designed to be extremely adaptable, to facilitate the mounting of a wide variety of sensors.

Key requirements for system operation include:

Optimal system performance requires proper ballasting. The profiling vehicle must be positively buoyant with a target up-cast speed of roughly 40 cm/s. As a rule of thumb, the profiling round trip (i.e. surface/bottom/surface) speed is roughly 1  minute per 10 meters of profiling depth. Thus, profiling to 200 m is sampled about every 20 min. The Wirewalker profiler has a ratcheting motion on the way down, as it uses the surface waves to propel the vehicle downwards, but smooth on the way up. The separation of upcast and downcast is handled in post processing with just the upcast typically used for detailed analysis. However, data is/can be collected during both upcast and downcast and very useful when looking at mooring
dynamics.